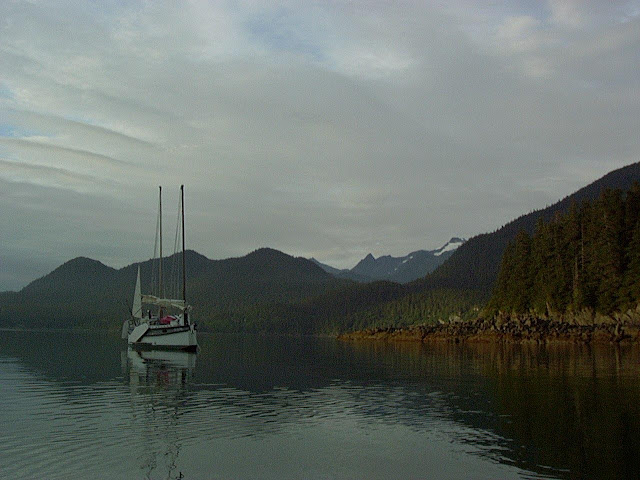 We designed and built her for our own needs, following Phil Bolger’s Advanced Sharpie concept. Launched in ‘97 of the previous millennium. Lived aboard for thirteen years and sailed a very good chunk of that. Anke, Scups (our canine partner) and me. Great years.

We sold her to another couple who lived aboard for five more years. They sold her to an officer in the Coast Guard who wanted to use her as a (motorized) hunting platform. After that things get fuzzy.

Well… under a further series of owners, she slid downhill. Fresh water leaks developed and went unattended. Ventilation went by the wayside. Rot set in.

In the end, we bought her from the Harbor for a dollar, salvaged her copper and remaining gear and burned her on an island beach.

A boat is still something more than a mere object. We dreamed her into being. We put her together with our four hands. Lived and loved aboard her for almost half our lives together.

Experiences sere and lang were had aboard her. Friends and family sometimes sailed along with us.

‘She’ (in LUNA’s case) partnered us, sheltered us, carried us, looked after us and depended on us. Taking her mortal remains apart by craft and force, saving what could be saved, then setting a match to her… it’s a solemn task.

We could see in her abandoned interior that the last(?) owner had struggled with life. Bills unpaid. An acquisitive obsession packed the hull with a super-abundance of stuff… worn clothing, broken tools and rotting food.

Yet she had tried to make a home for her child. There were sparkly, upbeat sayings tacked to the walls, small treasures assembled here and there, and drawings in a juvenile’s hand that showed that there was joy to be found in life.

LUNA’s decks were still watertight. Her woodstove was still operable and showed signs of use. Her walls, while softening, still held the wind at bay, and her ever strong bottom, the sea.

LUNA was our home.

And maybe at the end - for a while - she was home to a mother and daughter in their time of need.


PS. We cut the hull down to a 'barge' to deliver the copper plate for transport. LUNA's last voyage was under tow but she carried her own with dignity.
Posted by Dave Z at 8:39 PM