The PROMISE of Speed 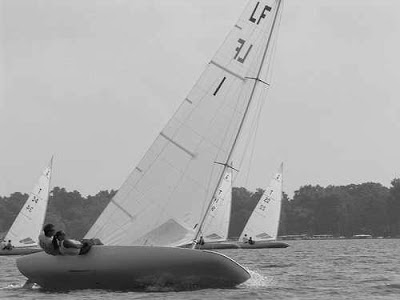 The PROMISE of Speed

Scows and barges have a reputation for being slow, which I and TriloBoats have done little to assuage. But Great Lakes racing scows have always been among the fastest monohulls, adjusted for length. Lately, high-sided, bluff-bowed racing scows such as MAGNUM, here, have been running with the big boys... and whuppin' 'em!


The heeled, immersed area of the scow hull form remains nearly in-line (less power loss to cross-hull flow) and much larger (more righting arm to stand up to sail). The broad-yet-low-resistance forward area of the scow rises over waves, where the fine entry of the sharpie-style digs in and absorbs more of a wave's stopping power.

TriloBoats are optimized for DIY construction, not speed. Their large deadflat, amid-ships, plays an important role in minimizing lofting, layout, cutting, spiling and bevelling. Sheet materials (e.g., plywood, foamboard and copper plate/bronze angle) are easily incorporated. Curves are few and simple (no recurve and lying in a single plane).

NOTE: I've only heard it asserted that rockered bottoms are inherently faster than deadflat ones, but never come across actual evidence. Fact is, many commercial tow barges have large deadflats, despite their apparently efficient use over long hauls. If anyone can point to substantial evidence, one way or the other, I'd love to hear of it! 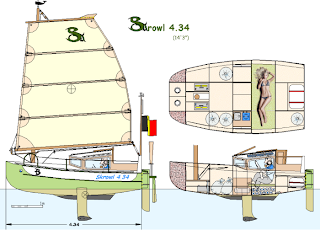 SKROWL, by Quenet Yann, is a brilliant, DIY interpretation of a MAGNUM scow hullform.  Using multiple chines, he approximates a saucer bottom. Using foam-carved corners, glassed over (forward and outboard), he softens inefficient entry angles and planes at the bow. In combination, this should be a very fast hull form at any size. In addition, he outfits the boat with gofast bells and whistles... high aspect foil daggerboards, twin rudders, powerful rig (he has others than shown in this lines plan).

My guess is that this style scow will tend wider for their length than pointy boats, though windsurfers (same hull form) successfully tend long and narrow.  For a cruiser/live-aboard, however, the ability to achieve speed in a boat that's wide for its length is a welcome feature.

So naturally, I find myself musing on the spectrum, represented by TriloBoats on one end, and SKROWL on the other. As usual, it is a 'morphing' process of small steps. I've left many possibilities out, here, hitting only the highlights. Keep in mind that these sketches are but crude characatures, exagerated for clarity, and don't represent likely proportions or curves.

Each step along the way eases some of the inherent drawbacks of a TriloBoat, at a cost in money, building time and effort. Involvement of resins and synthetics tend to increase. The easy incorporation of other secondary sheet materials (principally copper, angle and foamboard) becomes more and more complicated.
Payoff needs to be considered, as always.

Anke and I build on a shoestring, usually in marginal and/or time limited conditions. Since we like to copper plate, it takes some tricky work to handle the new curves. It's difficult to fasten copper to glassed foam. A fast hull with a our slow rig (etc.) won't make the most of the investment. And, truth be told, we're already fast, off the wind, and prefer not to sail in sloppy headwinds, where the SKROWL approach really helps.

There are drawbacks, as well, even once built. Rectangular storage is very hard to give up, even though the slopes involved are small. Bronze angle is tough, tough, and can make the difference between shrugging off a rock and major repairs (SKROWL bows can't use angle at the vulnerable, forward quarters).

One more concept to throw into the blender. Phil Bolger's ADVANCED SHARPIES (AS) are 'box' sharpies whose bottom curve in profile matches their side curves in plan. The idea is to create a symmetrical chine... this tends to equalize pressure on either side, reducing or eliminating drag from turbulent, cross-chine flow. LUNA (our AS) did, in fact, slip right along and tracked beautifully.

An ADVANCED BARGE (AB) could utilize the same principles, and be SKROWLed, as well.

So here's a gander at such a beast, adapted from a T32x8:

One solution to the copper plate dilemma would be to carry the forward bottom higher, SKROWLING forward and above the end of the copper plate (Bottom and Sides) with its bronze angle. This would make the curve more abrupt, and therefore less slippery, but that's what compromise is all about.

Another would be to leave it low, and copper in the more traditional manner -- narrow strips of thinner copper which can follow the curves. Fastening is still a problem... still, epoxy sockets for barbed or threaded fasteners are one among many possible solutions. Where there's the will, there's a way.

A few thoughts about the after arrangement shown... it is a modification to the simple, box barge shape, intended to compliment the faster, TABed and SKROWLED bow. Essentially, the flat bottom is divided into three 'panels', and the outboard ones are twisted from flat at their forward ends, increasingly angled, aft.

This 'faux' multi-chine could be achieved by darting the flat expanse of bottom material (similar to a tailor's dart in fabric). The mid panel is raised to the desired curve. The outer panels' outboard, aft corners are jacked up and a bit in, twisting them from flat, forward to canted at the transom. Tape N Glue along the matching seams.This draws the sides slightly inboard for a bit of aft, side curvature. More can be added, if desired, by trimming the outboard edges.

By lowering (easing) the aft curve, better release is achieved for a slipperier hull. The canted, outboard panels clear the water, when heeled, avoiding (box barge) transom dip and drag.

In conclusion, TAB and/or SKROWL adaptations of TriloBoat hulls should result in  slipperier, more easily driven hulls. Coupled with a powerful rig and efficient lateral resistance, I believe these hulls could be quite fast while retaining most barge/scow advantages, including relatively easy construction.