THE COMPLETE SAILOR: A Review 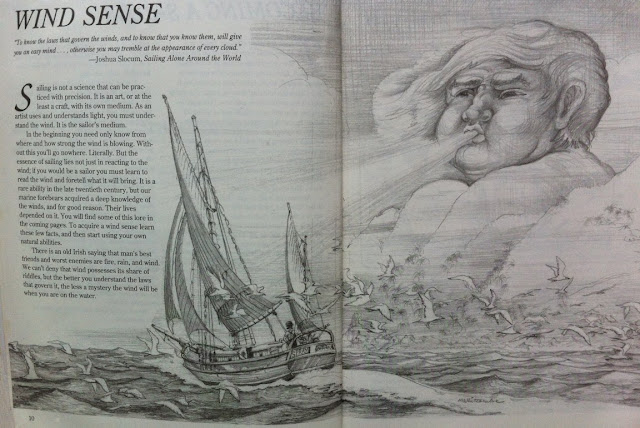 
Long before a wheel rolled, some shaggy fellow straddled a log or sat on a raft and held up something to catch the wind.
-- From The Complete Sailor

I'm a modular kind of a guy.

I like to have things broken down into bite-size, manageable pieces that can be combined and compounded every which way, adapted to whatever situation presents itself. It's the way I think.

So does David Seidman.

Wind and water, sailing and anchoring and docking, marlinespike skills, charts and navigation... it's a long list of things to know. Each topic is covered in an easily digested page or two.

Seidman's prose is at once spare and flowing, covering the ground with a sure and easy stride. Mulford's illustrations are as evocative as they are informative. Together, they speak volumes in simple terms. Simple though it be, each time I open these pages I learn something new. Connect new dots and deepen my understanding.

This is one of the two friendliest how-to books on sailing I know (Jan Adkins' The Craft of Sail is a similar but less ambitious introduction, and now he's on board for the second edition). If you - like me - struggle through the dense and endless prose of such tomes as (the admittedly encyclopedic) Chapman's Piloting & Seamanship, you'll appreciate the lighter touch.

Another point I appreciate immensely is that examples are drawn from across a wide spectrum of vessels and their rigs. Not only the latest extrusions, but traditional and even funky boats are well represented. From balsa rafts to clipper ships. From Jeanneaus to JESTER. One can almost smell the pine tar!

This isn't a book written solely for trendsetters, but also - even primarily - for those of us going to sea by the means at hand.

So many books on sailing somehow manage to lose sight of the romance - the dream - of sail. Reading them, it's easy to imagine that seamanship is little more than another exercise in consumerism. That, with informed purchases and proper use of appliances, the world is your Disney. Or the other hand, perhaps worse, that the learning curve before us is so steep and long that one is discouraged to begin.

Dreams are delicate things. They often don't survive the necessary, accumulation of nuts and bolts and know-how that empower them. They get lost in data, overwhelmed by 'practicality', bogged down in tedium, abandoned in despair.

This book pilots us safely. In its care, we circumvent shoals of ennui and reefs of detail, enticed ever forward, eyes lifted at every league to the horizon...

The Complete Sailor is a gift to all of us who dream of water.


PS. The first edition features gorgeous chapter headers (such as that leading this post) by the late Mark Whitcombe. In the second edition, his artwork has been replaced by the work of Jan Adkins.

While I'm a big fan of Jan's, I miss Mark's touch. The extra materials - GPS, Racing and Trailering - aren't on my need-to-know list. For these reasons, I favor the first edition.

But both are excellent.

PSS. If nothing else, keeping a copy on board for guests is something I highly recommend. Sitting down with this book between us beats the oakum out of my own, unaccompanied words and doodles.


PSSS. I just found out that Kelly Mulford passed away in 2011. You can read his cousin's memorial post, here. 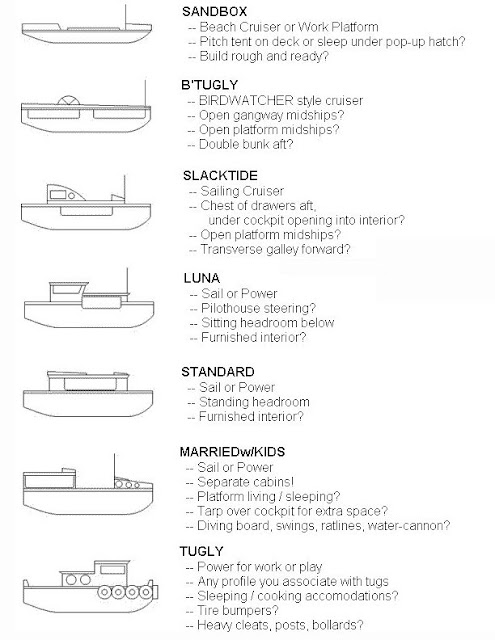 Real style is never right or wrong. It's a matter of being yourself on purpose.
-- G. Bruce Boyer

If you obey all the rules, you miss all the fun.
-- Katherine Hepburn

As kids, my brother and I got a lot of mileage out of empty cardboard boxes.

Anything from apple to refrigerator boxes got taken to the moon (space ships), to the bottom of the sea (submarines), across the Great Plains (conestoga wagons), over Niagra Falls (barrels rolling down the hill in our yard). We cut windows and gunports and portcullises into them as 'need' arose.

I recently worked up StudyPLANS for a T20 side profile (MATCHBOX). By matching beam, super-structure, interior and gear to intended use, a builder can go in most any direction.

The above graphic, showing some approaches I favor for such a small vessel,  represents a pretty fair cross-section of the TriloBoat bestiary, to date.

Box barge hulls are exceptionally versatile foundations for tailoring to any nautical purpose. They carry loads well on stable footing, have lots of working deck and interior volume. Parallel sides ease construction (especially over the mid-ships deadflat) and make the most of their ends (think wide bunks, foredecks and cockpits).

All this, and relatively fast and inexpensive to build!

The approaches shown are just the tip of an iceberg of imagination, possibility and compromise. Innovate; copy; modify; shake 'em up; put 'em in a blender!

A few that got left out:

We meet upon the level, and part upon the square.
-- Masonic Proverb

When building TRILOBYTE on the fly, a friend stopped by to see how we were doing. He's an ex-shopteacher/current bowyer... standards are high.

The task at hand was drilling the side windows for screws all around their perimeters.

Our usual approach is divide-and-conquer. This case was an eight foot stretch and we wanted fasteners every six inches or so. Open spaces are divided by twos or threes as seems right by eye. If we're feeling persnickety, we might measure and mark it, using a chip of wood to inset it. But we don't often.

This was a little too quick and dirty for our friend. He gave us a passionate speech on the virtues of precise patterns - how it was the mark of a professional. That it went quickly and looked its best.

We hemmed. We hawed. To show us how easy and efficient it all is, he volunteered to make us a jig.

He did, too. A nice li'l number that worked like a charm. A rabbeted slide with guide holes precisely placed. A thing of beauty, form and efficiency.

Problem is, by the time it was done - a matter of a half hour or so - we'd already drilled AND mounted all the windows.

Looked fine, too. Even he admitted it.

Why? The algorithms were perfect! Every note was precisely on pitch. Sounded for exactly the duration specified. Attack, reverb and fade were mathematically true to the nth decimal place.

Turns out, the human ear doesn't care for too much perfection. Finds it sterile and uninteresting. Got no soul. Turns out, introducing small errors of pitch, tone and timing brought it alive to us. Turns out, we prefer our imperfect, gritty, wonderful world with all its flaws. We insist on them.

I'm sure there's a lesson in there, somewhere.

But one thing that does come in handy in a square boat is a hole bored square to a surface. Not only handy, but if it's not square, often enough it's gotta be plugged and drilled again. Otherwise a fastner might not pass through its hole in a metal plate. Or a fastner head, washer or nut won't sit flat and water intrudes. Or the durn thing comes out the side.

A square jig for a square boat helps us along.

Next time you're near a drill press, I recommend this:

Start with  a nice, rectangular chunk of stock - hardwood or aluminum work easily and hold up.

Inset a line of squared off holes of standard sizes along edges - just enough room for your drills when pressed against a wall.

To use, align a face of the jig with the reference face to which your hole will be square or parallel. Run your drill through, or at least far enough to continue square without the jig.

Unless the jig is clamped (seldom necessary), I find it helps to withdraw the jig with the bit, rather than the bit alone. If you get off line withdrawing a running power drill while still in the jig, it can get jumpy.

It helps if the jig is big enough to clamp a bit of stock to faces as a guide if a necessary to reach a reference face. For example, when drilling bolts for the handrails (whose upper face had been rounded) we used their sides as reference and drilled parallel to that face and square to the run of the upper face.

This jig - with some extra long bits - has given us quick and easy square holes, every time we've needed it.