Rant and Roar: The Problem of Purity 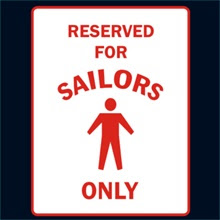 
Rant and Roar: The Problem of Purity

Jerome 'Jay' FitzGerald is one of the sailors I very much respect, albeit across quite a gulf of attitude and approach.

Jay makes a case for 'pure' sailing vessels in fierce terms. While some are affronted, I confess to enjoying a passionate and provocative rant. He challenges me to review my own choices, ever a worthwhile venture.

For him, a vessel with a motor is not a sailboat, but rather a sail assisted powerboat.

In his Wind and Tide: An Introduction to Cruising in Pure Sailing Craft, he writes (his emphasis):

...Without the engine, had they encountered [a] hundred feet of contrary current and not been able to deal with it – even after a thousand miles, they still would have failed to make port. Properly, then, their [dependence on power] ratio should be expressed as 100% power-assisted sail, as they would have been helpless without the engine. It is important to note that in any activity that is judged by its completion, a 1% failure means a 100% failure... Let us be 100% sailors...

Strong words, and a stirring call to develop the full range of a sailor's skills for the safety and sheer joy they afford. In his writings, he shares many of those skills, and further elaborates on his themes.

I find it instructive to examine why it is that his position is not my own, despite that I'm a passionate advocate of wind-and-muscle cruising.

There is the matter of purity. I'm allergic to the notion. Purity seems to me a questionable gradient.

Which is more pure? A fiberglass or plywood hull? How about one made of timbers 'harvested' from a forest? A sail of dacron or of Egyptian cotton? How about if I grow, spin and weave the cloth? A bronze or galvanized fitting? How 'bout I make my own from drift teak? Am I pure, yet?

I'm unlikely to personally participate in any production aspect of the wholesale form of these items. None come without environmental cost. Sure, some more than others, but purity is hardly the standard in cost/benefit analysis.

Thing is, being thwarted within spitting distance of harbor happens frequently to us 'pure sailors'. It happens to Jay. More skill and a more able boat, the less often is all. The voyage takes another turn and takes a while longer... it may not end until that port is eventually made, but neither has it failed.

If ya survive, ya think ya had a good time!

Similarly, where Jay argues the superior aesthetics of engine-free sailing, I sympathize, but recognize personal preferences. He argues the character building virtues of adversity. Me? I go out of my way to avoid 'em!

Jay eloquently argues that pure sail is cheaper, simpler, and safer than having a motor. Now he's talkin'! Here I have no qualms or quibbles. It's not that hundred feet of contrary current that's the problem; it's the motor quitting in the jaws at port's entrance, with all sail stowed on a dark and stormy night. We'd never be there without faith in our engine.

So I find myself rather pragmatic than pure.

Sifting through the fun of a good rant, I agree that engines can slow the learning curve and substitute for skill. I agree that the aesthetic and challenge of sail can be quashed by the motor. I agree that they can tempt one into situations beyond our engine-less abilities and quit, abandoning us to fate.

They can and often do.

But we each of us face the sea with our own set of values, abilities, proclivities and context. One sailor may advise another, but we must each steer our own course, sailing a thousand choices. Ultimately, our choices, intersecting with the sea, determine the voyage. Caution's a virtue, no matter how we roll. We learn as we go, usually via whatever set of hard knocks we've arranged for ourselves.

And fair winds to us all!