Can Stoves Can Do

When you light a fire, you commit an act of magic...
What thrilling enchantment,
What cunning sorcery,
Has the work of your hands created?
-- Anthony Murphy


Can Stoves Can Do

Anke and I spent many a pleasant summer evening, this year, watching the sun go down in the company of a (tin) can stove. A hot meal and spruce tea with the smell of woodsmoke on the air...

Cans are amazing resources.They're to be found anywhere and everywhere. They can be bought brand new with a bonus load of... let's say olives. Recycling centers have dumpster loads of them in a variety of shapes and sizes. Paint cans and buckets can be bought new and empty. For the improvised galley, they can easily be worked into pots, pans, mugs, bowls...

And stoves! Biomass fueled stoves that last long enough to pay handsomely for the effort invested. Biomass itself is inexpensive and nearly ubiquitous... wood, weed, manure and peat. With a fire-proof base (e.g., a gravel box), they can be used aboard a boat of most any size.

Can stoves cost next to nothing, contain and enhance the efficiency of an open fire and are scalable to most any need. They're made from various combinations of cans, including those for canned foods, paint cans and buckets or even stove-pipe, various pots or ammo cans.

A 55gal oil barrel, anyone?

Can stoves do burn out in a season or so of use. While a can-opener, nail and rock are all the tools necessary, I recommend investing in a good set of tools - tin snips, pliers, drill and step bit, awl, file(s) - that let one replace as necessary. Each replacement is an opportunity to experiment with a new design or refine an old one.

These featured are starting point for the pyromaniacally mad scientist. Can proportions; hole sizes, placement and frequencies; cutouts; airflow channels; open top/bottom designs, pot/pan supports, handling... all afford plenty to dink with. It's a vast world of possibility with lots of info on the net. Here is a visual sampling.

Or you can simply copy a proven design. It's hard to go too far wrong.

Remember, cut cans are sharp and can generate nasty cuts. Wear gloves and eye protection when building stoves. Smooth the edges as well as practical, and stay alert when using. Also, fire is inherently dangerous. Use all precautions, including having extinguisher technology at hand while using.

This is the simplest type, extensively field-tested during the Great Depression. They're not terribly efficient (though much more so than an open fire), and produce a fair amount of smoke. Be sure to breath as little of that as possible!

At minimum, it's a top-loading can with lots of air holes. Refinements limit and focus hole spacing, add fueling ports and pot/pan support. The one shown above is a decent model.

If the top is left intact (unopened end of a can positioned UP) it can be used as a cooking surface. But heat isn't easy to control, and I'd consider that a fall-back option.

These are a big improvement in efficiency over Hobo Stoves.

They work by setting up a powerful draft blowing through a sharp-angled, insulated burn chamber. Oxygen is abundant and well mixed with combustion gasses at higher-than-normal temperatures for an efficient, low smoke burn. The roar of their draw gives them their name.

All sorts of non-combustible materials can be used for insulation, but the more air space is trapped, the better the insulation will be. The less its thermal mass, the sooner your chamber will reach its maximum temperature.


SQUARE BOAT NOTE: If, like me, don't like fitting curves to curves, combustion chamber/chimney designs can be adapted to cans that have been squared after cutting off their ends. They will meet at 45deg.

These are another set of efficient designs which first pyrolize their  fuel (i.e., using primary combustion heat to drive off combustible gases from the fuel and carbonize the remains) and then burn the gasses. This principle has been used to fire internal combustion engines for transport and electrical power production.

The link given above is for a simple model, used in a simple mode. Very similar alternatives include TLUD (Top-Lit UpDraft) Stoves. Despite their resemblance,  these work on a different principle. This one features a more precise build with high-end tips you may wish to apply to other stoves.

Aluminum can stoves burn alcohol, rather than biomass. They can be considerably more sophisticated (and finnicky) than those listed above. I've heard they don't work as well in very cold weather. But they are the last word in ultra-light stoves.

Here's a general principles article to get you started.

Wick Stove (aka Soda Can Stove)

These work by saturating the wick with alcohol. It evaporates, and the gasses are burned. Some models feature a lid to snuff the flame and preserve fuel for later, others merely let the fuel load burn out.

Here's a variation that's a bit simpler to build, with some cool accessories.
***** 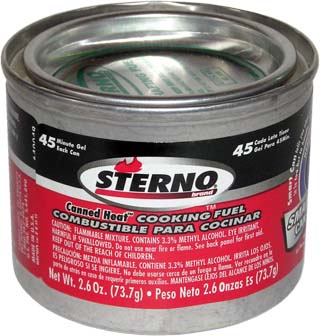 Gelled alcohol commercial product
Gelled Alcohol
Gelled alcohol is primarily used for chaffing dishes (serving dishes kept warm by the flame), but they're great for camping and micro-cruising. Stands are cheap, and easy to DIY (can even use a can... do the Can-Can!).
BTUs are somewhat low by volume, so they're slower. Many are methanol based for higher BTU. Methanol is poisonous, so don't cook directly over the flame, but use a pot (AND extra-good ventilation!).
The gel is nearly spill-proof, and better, can be made DIY. Best of all, the ingredients (shells, vinegar, alcohol) can all be DIYed in the field, making this a long-range option. Larger surface areas (bigger diameter cans) can help overcome lower BTUs/sq.in..
Check out this article for a recipe.

This one uses a penny's weight  to regulate fuel flow rate. The how is simple but the why complicated.

When all is in good proportion, their flame jets are a thing of beauty. They're considered by many hikers to be the ultimate in ultra-light heat.


There's something about an open fire. Something deep in the blood as we stare into the eyes of our companion of a thousand generations. Our worst enemy, it is said, and our best friend.

But something, too, in fire contained. Focused. Intensified.

We are apprentices of fire's alchemical magic. We seek its ways. Learn to feed it while avoiding its bite. Learning to excite its passions without being consumed by them.

Together transforming dull matter into heat and light.