Virtually everything was home-made, including the lines.
He wove his own rope from recycled baling twine.
He sewed his own canvas sails and colored them with redwood deck stain.
From Kim Apel's Photo Essay on the Sacramento River Delta's Gunkhole 2008 Cruise

A tarp for shelter, a fire-pit on deck. A loaf of bread, a jug o' wine, a boon companion... you know the drill. Good, clean fun!

The beauty of a clear, open deck of this type is that the hull itself is all hold space, and the deck is all potential. The SWiss Army Boat, personified.

You could erect one of a variety of tents for shelter, as need demands.... an open tarp for clement, balmy nights; a large tent for wintry, inside days at anchor, a bunch of pup-tents for when the kids and their friends come to taste the Good Life.

You could build a skiff or sew your sails on a deck like this. Haul cargo. Beachcomb. Picnic aboard amidst the mangroves. Play bocce!

You could play with all the rigs you've dreamed of... no cabin to interfere. 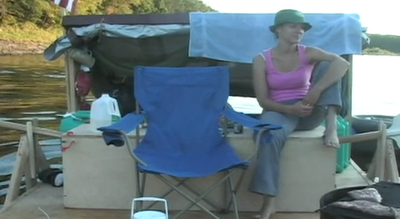 I tend to barges and scows before rafts, but that may be partly as I don't live at the headwaters of a river.

These pics show some of the simple fun to be had. Note the oil-barrel fire-pit, folding chairs, bug nets, inflatable mattress... nothing fancy in sight. You could even pop that shelter roof up for a downwind sail!

Well, this balsa log raft is more ambitious, and Willis definitely took it to extremes. You can read about his adventures in Seaworthy: Adrift with William Willis in the Golden Age of Rafting by T.R. Pearson.

So it doesn't take much to get out on the water and stay there for months on end. Take a fishin' pole and a friend...