The origins of obsession are often lost in the murky past. Why am I a Square Boat-nik?

Who knows? Maybe they sat me on a square bucket during potty training? Maybe the ‘voyages’ my Brother and I made in cardboard boxes played a role? Maybe being generally un-hip (aka square) had something to do with it?

But sometimes, they jump out at ya!

Walt Kelly’s Pogo featured a loose community of characters living deep in Okefenokee Swamp. Through them, he gently parodied (US) American life, politics and religion in a sly, folksy manner now all but extinct.

My Grandparents had several of his books, collecting the strip. One of the many highlights of visiting them was to read and reread them all, understanding more of their deeper wit with each passing year. Their antics were plenty amusing on a superficial level, and I came to see how they reflected those of the larger world around me, in all its nonsensical glory.

In another way of looking at them, each of the characters could be seen as facets of a single personality. The calm center of Pogo himself; loyal Churchy; grumpy ol' Porkypine; pragmatic Missus Beaver with her children chockablock with wide-eyed wonder and mischief; Albert, impetuous and half-cocked; Ma'm'selle, dreamy yet sensible; even the Deacon, tending to a grim preachiness... all aspects I recognize in myself.

And fer sure, the denizens of Okefenokee enjoyed their lives.

While often to be seen foraging for nuts or greens or fishing, they had no paid work. No schedules. No commute. Just the long, lazy days, filled with philosophistry, poetry, music and the occasional fooferaw.

And frequently they would enjoy themselves in a series of punts – box barges in miniature – named after cities and notables whom Walt admired.

Naturally, the indolence and sheer fun of it all blended in my mind with those square boats. 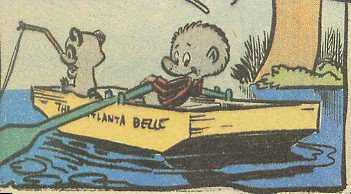 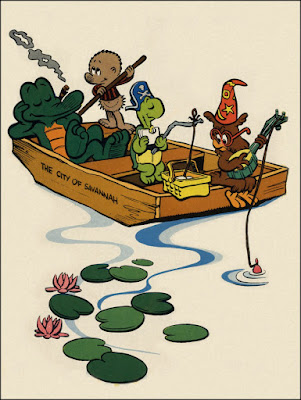 NOTE: I believe all graphics to be the work of Walt Kelly, with the exception of the final panel (drawn in tribute on Walt's passing), which artist I was unable to identify. [I've since found an attribution to Selby Kelly, Walt's wife and collaborator... seeking confirmation.]

NOTE: Other fictional communities of roughly similar flavor include A.A. Milne's Winnie the Pooh stories, Kenneth Grahame's The Wind in the Willows, and Arthur Ransome's Swallows and Amazons stories.
Posted by Dave Z at 5:56 AM