COVID-19: Why Nobody Likes Math 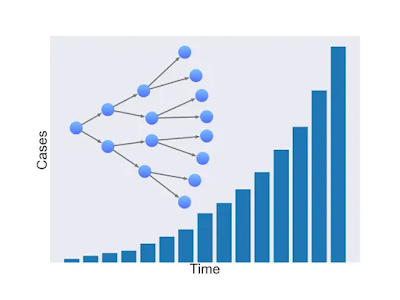 
COVID-19: Why Nobody Likes Math
(Or at least, Mathematicians)

Um. The majority of people I speak with are busy making business-as-usual plans through summer.

COVID-19's global reach is doubling every 4 to 6 days resulting in explosive exponential growth. There's a lot of finicky issues in calculating these numbers... let's be optimistic and say it's only doubling every 10 days.

That is to say, the total number of people who have been infected with the virus doubles in every 10 day period. Let's roundly say that each month has three 10 day periods, so it will double three times every month. The total at the beginning of any month will grow by a multiple of 2... 4... 8 times by the end of that month.

How many months ahead do you want to plan? Each month, the total grows by a factor of 8. Here's a convenient little planner:


Things not cool today? So many months from now, the first number is how many times worse it will be at the present doubling rate. The math spotlights the urgency.

If you can think in terms of doubling time (rather than days, weeks and months) it will help you with vital decisions.

At the rates we used, the spread will peak sometime between four and five months out if it hasn't been flattened. That's the July? August? the President mentioned.

While the CDC knows all this (their data, after all), they are coy about being specific. They urge, for example, that we have supplies on hand for "a period of time", or occasionally "two weeks". Yet stay-at-home orders implemented today are likely to be in place and tightening for months ahead.

China managed to flatten their curve and are seeing declining numbers of new cases. Whatever we might think of their politics, they moved relatively early and according to accepted epidemiological practice. In two months, they were able to locally flatten and reverse spread. Nevertheless, they may miss a case or two, or be re-infected from the rest of the world which has not taken strident measures to date. Then it's start over with the same 'draconian' measures.

Social distance and travel restrictions will slow the rate of growth (won't eliminate it without unAmerican resolve). But these flattening measures also prolong the period of pandemic by spreading cases over time. Even if no measures are taken, the spread slows as a higher percentage of the population acquires immunity or dies.

Things won't turn on a dime. We are seeing measures ramp up late in the game, but early in the eventual spread. We hope to avoid the spike. At best, there will be tightening restrictions for months to come. Our best laid plans are all agley.

Meanwhile, the global economy is coming apart at the seams.

So provision up, batten down hatches and take a reef, me Hearties!
Were in the storm, sure enough!!


PS. Among the mitigation and travel restriction measures being implemented, travel by private vessel is being restricted in places around the globe. Even those of us who live aboard need to get where we want to be NOW, before rules and enforcement get around to our stretch of water!
Posted by Dave Z at 11:40 AM